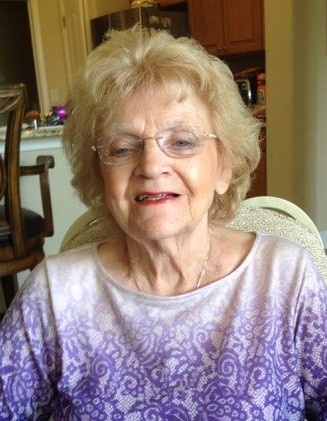 She was born on April 6, 1929 in Hastings, MN, to the late Theodore and Anna (Kneifel) Salzl.  In addition to her parents, she was preceded in death by her husbands, Dennis Hynden, and James Farrell; and siblings, Madeline Moes, Marie Kelly, Theresa Tix, Ann Dohmen, Peter and John Salzl.

Viola was a nurse and moved to Sun City Center from New Port Richey in 2002.  She had a zest for life and was an amazing person! Viola was full of God's love for every human being, sharing this in her nursing career. She was Catholic and had a deep faith. Viola enjoyed art, ceramics, gardening, baking and cooking, dancing, music, and a great glass of wine.

Left to cherish her memory are her two daughters, Gloria Marsilio and her husband Fred of Nesconset, New York and their children, Angela and Robert, and Marlene Agruso and her husband Joel of Ronkonkoma, New York and their children, George and Valerie; son, Gary Hynden of Sun City Center; her dearest friend, Paul Powers of Sun City Center; great grandchildren, Jake, Julian, Ruby, Jackson, Maximus, Nicholas, Christopher, Daniel, Leonardo, Isabella, and Nunzio; brother, Joseph Salzl of Minneapolis; and many nieces and nephews.

A visitation will be held on Wednesday, May 1 from 5-8 p.m. at Lundberg Funeral Home, Cannon Falls. Mass of Christian Burial will be on Thursday, May 2 at 10:30 a.m., with visitation from 9:30-10:30 a.m., at St. Mathias Catholic Church, Hampton. Interment will follow directly at Fort Snelling National Cemetery at 1:05 p.m. at Assembly Area #1.

To order memorial trees or send flowers to the family in memory of Viola Hynden, please visit our flower store.