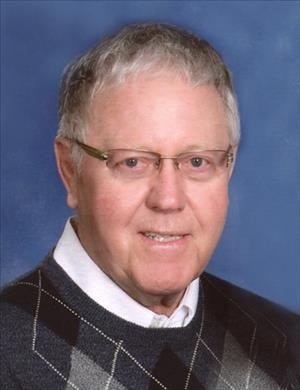 Virgil Qualle, age 79, of Cannon Falls, died Thursday, August 3, 2017 at his home surrounded by his family. Virgil Leroy Qualle was born on April 12, 1938, in Dennison, MN, the son of Lewis and Amanda (Stromback) Qualle. He grew up in the area and graduated from Cannon Falls High school in 1956. Virgil then served in the US Army Reserves and worked several years at Lindahl Tire Shop. On December 17, 1960 Virgil was united in marriage to Darlene Nelson at the Vasa Lutheran Church. Virgil worked as Superintendent of Carpentry for 3M Construction and James Steele for many years. He purchased the KOA Campground in 1968 which he ran for 11 years, selling it in 1979. In 1985 Virgil bought the Piccadilly Boutique in Cannon Falls and later sold the building to Scofield Drug in 1996. In 1994 he opened Quality Storage which he owned and operated to this date. Virgil was active in the First English Lutheran Church, serving on various committees. He served several years on the Cannon Falls Township Planning Commission and Town Board. He was an active and proud member of the Cannon Falls Fire Department for 31 years. Virgil was also a member of the Cannon Falls Lions Club. He enjoyed the time spent with his family, especially his grandchildren and great-grandchildren. Vacation trips and, of course, fishing were always a priority. Virgil enjoyed quiet time at the cabin, playing cards, and morning men's coffee time. Survivors include his wife Dar; daughters Brenda (Scott) Safe, and Buffy (Kevin) Nerud; grandchildren Nate (Alice) Safe of Kindred ND, Cori ((Damon) McDougald, of Parkville, MO, Adam (Megan) Nerud of Byron, MN, and Jacob Nerud and fiancAC.e Krissy McCoy, and Aaron Nerud and fiancAC.e Chelsie Soine; great-grandchildren Kaden, Charles, and Spencer Safe, Madison and Jackson Nerud, and Thorson McDougald; sister Cindy (Marland) Husaby; brother Russell (Arlene) Qualle; sister-in-law Lee Qualle of Red Wing, and many nieces and nephews Virgil was preceded in death by his parents, his brothers Jo, Clifford, Henry, Walter, Edward, and Leslie, as well as his sisters Agnes, Lil, and Gert. Funeral service will be at 11:00 am, Monday, August 7, 2017 at First English Lutheran Church in Cannon Falls. Interment will be in the Cannon Falls Cemetery. Visitation will be from 4-7 pm, Sunday August 6, 2017 at the Lundberg Funeral Home in Cannon Falls, and one hour prior to the service at the church on Monday. Memorials are suggested to First English Lutheran or to Mayo Clinic Health Systems Hospice, Red Wing.

To order memorial trees or send flowers to the family in memory of Virgil Qualle, please visit our flower store.