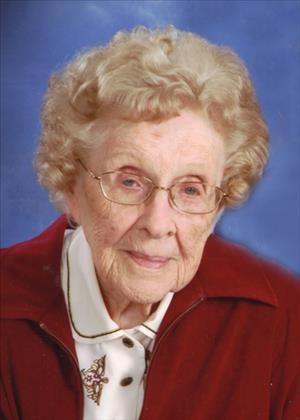 Virginia Gertrude Hjermstad passed away peacefully on Monday, September 15, 2014 surrounded by her family. She was 96. She was born on July 20, 1918, at Ismay, Montana, the oldest child of Ira and Nellie (Cooper) Waters. The young family moved to Trail City, South Dakota, where her two brothers, Alvin and Guy, were born. Virginia attended school at Trail City until the end of her junior year in high school, when the family moved to nearby Timber Lake. She graduated as valedictorian of the 1935 class from Timber Lake High School. To earn her teaching degree, she attended Northern Normal and Industrial School in Aberdeen, South Dakota. During her second year, the family moved to Cannon Falls. She joined them upon graduation. Her first teaching job was in the public country school at Oxford. She needed a car, so salesman Arnie Hjermstad brought her his new Chevrolet "to try." She did plan to buy a car, but every time he checked with her about it, he said she'd better just "try it" a little longer. They were married on November 9, 1941, in Zumbrota. World events changed their lives forever, and Arnie soon left for military training in Texas. Virginia joined him there and also later in Massachusetts, where his unit was awaiting transportation to northern Africa by ship. After he sailed away, she joined her parents in Alma Center, Wisconsin, where she spent the war and had that new car to drive. When Arnie came home in 1945, the young couple returned to Cannon Falls. Virginia taught one year at the Underdahl School in the southern Sogn Valley and for over twenty years was a substitute teacher in Cannon Falls. She taught the spring kindergarten class for many years. Virginia and Arnie were very active in the community. She was a teacher and superintendent of the Sunday School at the Congregational Church. They joined and became active members of the Order of the Eastern Star, and Virginia served several terms as Worthy Matron. Supporting Arnie's status as a World War II veteran, Virginia was a member of the VFW and American Legion Auxiliaries. In 1959 they bought the Gamble Store in Cannon Falls. Virginia was a full partner in the business as bookkeeper, clerk, and buyer. She and Arnie enjoyed many trips they earned while associated with the Gambles company. Due to changes in the hardware business, the name is now Hjermstad Trustworthy Hardware Store. Since she was a talented cook and gracious hostess, it was difficult to leave Virginia's home without being fed. She always said, "If they come this far, you've got to feed them." Her hobbies were camping, collecting Red Wing pottery, and playing cards like 500 and bridge. She was the clever "queen of finesse" at those card games. A yearly vacation to Burlington Bay Campground on Lake Superior at Two Harbors was a Hjermstad family tradition that came to include their grandchildren. Virginia was preceded in death by her parents and her two brothers, Alvin and Guy Waters. She is survived and sorely missed by her husband of over 72 years, Arnold; her three sons: Robert (Roslyn) and James (Cyndy) of Cannon Falls; and Gary (Deb) of Deadwood, South Dakota; two sisters-in-law, Sunny Waters and Hazel Peterson; numerous grandchildren and great grandchildren, nieces, nephews, and cousins. A visitation will be held on Thursday, Sep. 18 from 4:30-7 p.m., with an Order of Eastern Star service at 7:00 p.m., at Lundberg Funeral Home in Cannon Falls. Funeral service will be on Friday at 11:00 a.m., with visitation at church from 10-11 a.m., at the First Congregational United Church of Christ in Cannon Falls. Interment will follow at the Cannon Falls Cemetery. Active pallbearers will be Aaron Hjermstad, Alex Hjermstad, Adam Hjermstad, Rosie Ayerhart, Ryan Lee, and Raelyn Priem. Honorary pallbearers will be the grandchildren and great-grandchildren. Memorials are preferred to First Congregational United Church of Christ, Mayo Clinic Health Systems – Red Wing Hospice, or donor's choice.

with an Order of Eastern Star service at 7:00 p.m.

To order memorial trees or send flowers to the family in memory of Virginia Hjermstad, please visit our flower store.