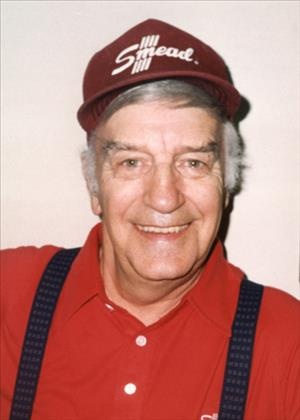 Ward Fritz Duncan, 89, husband of Muriel Duncan of Zumbrota Minnesota, died on Friday, March 3, 2017. Ward was born February 18, 1928, in Cannon Falls, Minnesota to Edgar and Elizabeth (Hultman) Duncan. Ward was the second of five children. The Duncan family briefly lived in Red Lake Falls. While there, Charles Lindbergh landed his plane. The family went to see it and Lindbergh put little Ward on the wing of his plane. The family returned to Cannon Falls where Ward attended country school - Benway, District #137 - outside of Cannon Falls through eighth grade, then started at Cannon Falls High School. Ward was not expected to survive his childhood due to rheumatic fever. He had extended hospital stays and was near death more than once. When a young adult, the family doctor told Ward he could live to 60 if he took care of himself. Because of his health, Ward was unable to join the military. Ward was confirmed at St. Ansgar's Lutheran Church in Cannon Falls. Ward and Muriel met when Ward's older sister Jeanne was dating Muriel's older brother LeRoy Holien. On April 2, 1951, Ward married Muriel Holien in St. Paul, MN. LeRoy and Jeanne Holien were their attendants. LeRoy and Ward were lifelong friends. Ward's special name for Muriel became "Mooney." He made his own greeting cards and composed verses for Muriel throughout their "almost" 66 years together. Ward and Muriel had two children, Doug and Sandy. Ward liked to tell how they were both born on April 17th, exactly two years apart and within 5 minutes of the same time. Ward and Muriel lived through some hard times. Ward enjoyed many blessings in his later years and was especially proud of his family. As a young man, Ward worked a wide variety of farm and ranch jobs. He went west to South Dakota and Montana. As an adult, Ward found a career in driving. Ward was a bus driver, local hauler, and long-haul trucker - all kinds of freight. He would laugh about owning a Taxi company in Cannon Falls. "We got rich," he joked, but he did save and frame the first 35 cents he made from Duncan Taxi Service. Ward was most proud of driving semi trucks for Smead Manufacturing of Hastings. Ward kept his trucks sparkling clean. The family photo albums have as many pictures of trucks as people. By the time Ward retired in 1993, he had traveled to all 48 continental United States and logged about six million miles—accident and ticket free! For the last fifteen years, Ward and Muriel have resided in Zumbrota. They raised their children in Cannon Falls (a brief time was spent in California and Forest Lake, MN). From 1973 to 1978, Ward and Muriel lived in Cambridge and Isanti. After that, they lived in Red Wing, Wanamingo, and Red Wing again, with some winters spent in Missions, Texas. As occasion allowed, over thirty-some years, Ward and his siblings and their spouses could be found at his mother Liz Duncan's home on Saturday mornings for coffee time. Ward and Muriel attended Duncan and Holien family functions and reunions. Ward owned hundreds of cars, but usually fewer than five at a time. Restored collectible cars brought Ward great joy. He'd show them in parades. After retirement, Ward liked puttering around in one of his outbuildings or the garage, perhaps while listening to Country Western music. Ward and Muriel enjoyed concerts and music shows locally at Crossings and on trips to places like Branson, Missouri. Together, they also liked going to Lanesboro, feeding and watching birds, spending time with family and reminiscing - recalling details of special quips or traits of each family member. Ward's granddaughter Melissa helped him write a book about his life, "Through the Rearview Mirror," just before his 75th birthday. Even through last fall, Ward took care of his large lawn with his fleet of John Deere tractors and Bobcat. Ward was a member of Lighthouse Community Church of Zumbrota, pastored by Reverend Janet Fischer. Ward is survived by his wife, Muriel Duncan of Zumbrota; son, Doug Duncan of Cannon Falls; daughter, Sandy Wing and her husband Ken of Isanti; Grandchildren, Melissa Halgrimson and her husband Tom of Byron; Matthew Rust of Isanti; Miranda McLean and her husband Andrew of Mahtomedi; and Kyle Wing and his significant other Megan Edgington of St. Anthony; great-grandchildren, Tate and Ray Halgrimson; Emerald Cramsie; Margaret, Handel and Lucy McLean; and Adelaide Wing; siblings Jeanne Holien, Patsy Davisson, and Bruce (Marg) Duncan; as well as many other family members and friends met on the road of life. Ward was preceded in death by his parents, brother David Duncan, and son-in-law Gary Rust. Visitation will be 4:00-7:00 PM Friday, April 7, 2017, at Lundberg Funeral Home, 5839 Hwy 19 Blvd, Cannon Falls. The memorial service will be at Wangen Prairie Lutheran Church, 11:00 AM Saturday, April 8th, 2017 at 34289 County 24 Blvd, Cannon Falls. Ward chose to donate his body to Mayo Clinic Rochester for medical education. Memorials preferred to Lighthouse Community Church, Zumbrota, or Wangen Prairie Lutheran Church, Cannon Falls. The family expresses gratitude to Zumbrota Care Center for care given during the last 18 days of Ward's life. Ward Duncan was a unique, "1928 Model A" man, well traveled and well loved.

To order memorial trees or send flowers to the family in memory of Ward Duncan, please visit our flower store.