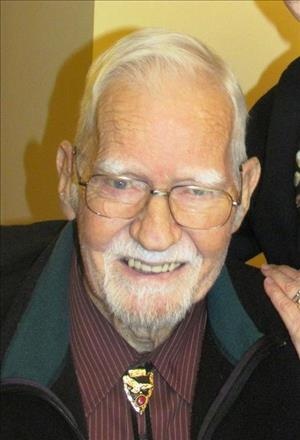 Wilbur M. Bergstrom, age 87 of Cannon Falls, died on Saturday morning, November 19, 2011 at the Angels Care Center in Cannon Falls. Wilbur Bergstrom was born April 17, 1924 on the family farm in Oxford Mills, Minnesota to the parents, Carl and Blanche (Welt) Bergstrom. Wilbur was united in marriage to Eva Marie Carlsen on March 4, 1944 in Minneapolis. Shortly thereafter, he entered active duty with the US Army in 1945 and was proud to serve his country. After returning from his military service he farmed a few years before taking a job that he held for over 20 years as Maintenance Engineer at the University of Minnesota Hospital. He worked for Sheldahl's in Northfield for a few years and after retirement he started the Web Key Shop. He and Eva Marie served as custodians at St. Ansgar's for 17 years and during his free time, Wilbur enjoyed collecting stamps, fixing things and spending time with his family. He also took great care of his '33 Ford. He is survived by his wife of 67 years Eva Marie; children, Wilbur "Bill" (Sandra) Bergstrom of Bloomington, MN, Linda (Steve) Swanson of Glendale, AZ, Leanne (Steve) Zielsdorf of Cannon Falls, Lorie (Scott Vreeland) Bergstrom of Minneapolis; 9 grandchildren; 11 great grandchildren; sister, Marcella Pelkey of Cannon Falls; brother, Delmar (Mildred) Bergstrom of Scottsdale, AZ and many nieces and nephews. He is preceded in death by his son, Keith Bergstrom; daughter, Katherine Bergstrom; parents and infant brother. Funeral service will be 11 am Wednesday, November 23, 2011 at St. Ansgar's Lutheran Church, 7459 Hwy 19 Blvd, Cannon Falls, with visitation one hour prior to the service at the church. Interment with military honors will be in the Cannon Falls Cemetery following the service.

To order memorial trees or send flowers to the family in memory of Wilbur Bergstrom, please visit our flower store.