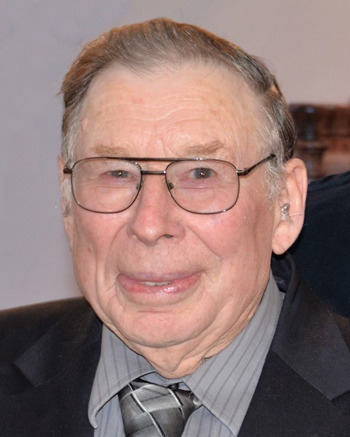 Willard Robert Emery was born on January 19, 1926, in Stanton Township, the son of Earl R. and Eva (Ruff) Emery. He grew up there and went to District 9 Country School. On May 7, 1949, Willard was united in marriage to Phyllis Margaret “Peggy” Daniels at the Stanton United Methodist Church. Willard served his country in the U. S. Army and was a member of the American legion Post # 84 in Northfield. He was a farmer all of his life and a gardener.

He sold seed and feed for various companies for years. He farmed until 1991. In 1993, Willard received the Outstanding Conservation Farmer Award from the Goodhue County Soil and Water Conservation District. He took over his father’s insurance business in 1962 and sold insurance for 57 years. He also served on the Dakota-Stanton Insurance Board for many years. He and Peggy traveled the U. S. with good friends, and went on several European farm tours. They also enjoyed cruises in the Caribbean and to Alaska. Willard served on the Stanton Cemetery Board for many years. He worked at two golf courses, mowing for 10 years. He also worked for the Northfield Ballroom. He was a lifelong member of the Stanton United Methodist Church, having been baptized and confirmed there.

LIVESTREAM INFORMATION: For those who would like to participate in Willard's service via livestream, you can watch the service on Saturday, November 26 at 11:00 AM. It can be viewed by scrolling to the bottom of this page and click PLAY to begin. Please leave a message of support on our Tribute Wall to let the family know you were able to watch the service. If you are having troubles with the Livestream, the service will be available to watch later in the day.

To order memorial trees or send flowers to the family in memory of Willard R. Emery, please visit our flower store.