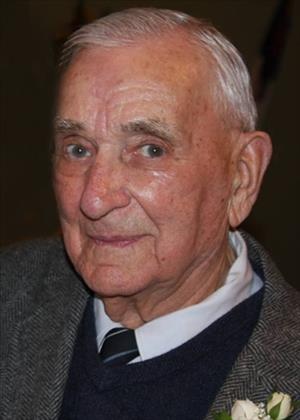 Willard Stanley "Willie" Finch, age 95 of Red Wing, died at home at Potter Ridge Assisted Living, Red Wing on Saturday morning, March 12, 2016. Willie was born on June 15, 1920 in Minnehaha County, South Dakota, the son of Ross G. and Caroline L. (Drenckhahn) Finch. He graduated from Valley Springs High School in Valley Springs, SD in 1938. He married Donna Ferber on June 15, 1953 in Red Wing, and they divorced after 14 years of marriage. He later married O. Lorrayne "Lolly" (Richardson) Budenski on September 9, 1972 in Vasa. She died January 22, 2001. Willie started working for Tomfohr Implement in 1949. He was there many years, while also farming. He was a reserve policeman for a time. He owned and operated the Standard Station in Red Wing for 4 years. He was a parts man for Lawrence Motors for 7 years. He worked for Holm Bros. Construction, Goodhue for 4 years. He later drove school bus for the Cannon Falls Schools from 1976 until 1990, retiring as bus supervisor. Willie was a member of Cannon River Lutheran Church, and formerly of Vasa Lutheran Church, where he served on church council and cemetery board. He was also on the Vasa Township Board for a few years. He was a longtime member of the Goodhue Lion's Club. He was also a member of the IORM (Improved Order of the Red Men), where he was a former State Sachem and president of Red Men Club. He married Vivian (Gesme) Brage on February 21, 2009. Willie was an avid reader, and especially enjoyed reading newspapers. He enjoyed fishing, and having conversations and coffee with those he would meet. You could always find him with a positive attitude and a smile to go with the many stories he would tell. He had a great sense of humor and was known for his many jokes. He had a good mind for detail, and followed and enjoyed discussing politics. Willie will be missed greatly by his family, whom he loved spending time with! He is survived by his wife, Vivian of Cannon Falls and her family; daughters, Lorrie Syverson of Augusta, MI, LouAnne (Don) Gaalaas of Red Wing; Lisa (Chris) Bosshart of Red Wing, and Peggy Anderson (Dan Lake) of Cannon Falls; 10 grandchildren, Libby Gaalaas of Duluth, Becky (Greg) Krum of Roseville, Erik Syverson, Amy Syverson-Shaffer (Amos), Scott (Lindsey) Langhans, Ryan (Kayla) Langhans, Brady and Rachel Bosshart, Erica (Jack) Aronson, and Megan Anderson; 7 great-grandchildren, Tommy Kishida, Scottie and Lillie Langhans, Allie and Izzy Langhans, Boe and Hunter Aronson; brother, Austin Finch of Amery, WI; sister, Mary Katherine Janisch of Red Wing; brother-in-law, Jon "Jack" (Vi) Richardson of Deer River; and nieces and nephews. He was preceded in death by his parents; wife, Lolly; and son, Ross Finch. A visitation will be held on Monday, March 14 from 4-8 pm at Lundberg Funeral Home in Cannon Falls. Funeral service will be on Tuesday at 3 pm, with visitation from 2-3 pm, at Vasa Lutheran Church. Interment will follow at the church cemetery. Pallbearers will be his grandchildren. Memorials are preferred to Vasa Lutheran Church, Cannon River Lutheran Church, and Mayo-Red Wing Hospice.

with visitation at church from 2-3 pm

To order memorial trees or send flowers to the family in memory of Willard Finch, please visit our flower store.